Introduction to Forex
The Importance of a Trading Plan
Risk: What is it?
Discover the Relationship Between Price Action & Supply and Demand
Trading Support and Resistance the Ying and Yang in Forex
The Traders Tool Kit: Technical Indicators
Japanese Candlesticks
Intermediate Risk Management
What You Need to Know Before Framing the Market
How to avoid Bad Habits
Insights Into Chart Patterns!
Leap Forward with Advanced Technicals
Understanding the Economic Fundamentals

Fundamental analysis is a method used by financial analysts and traders to study the various underlying forces that are in play in the economy, to make sense of price movements. ‘Fundamentals’ are economic data from a variety of sources. This data is significant because it is one of the two main drivers of price action within foreign exchange (forex) markets.

Why fundamentals are important

From a trader’s perspective, this multiplicity of economic data is the catalyst behind volatility within the forex market, causing the appearance of trading opportunities, but also on occasion a calming of the market with respect to any given currency pair.

This is essentially a traders’ guide into the starting points of economics, and is merely scratching the surface as opposed to really getting to the crux of how and why. You by no means need an economics degree to trade, but these points will hopefully help those without a detailed understanding to comprehend why some moves happen.

How they affect the market

There will be more on specific data to follow, but for now it is important to appreciate how fundamental data impacts the market. Traders view data through three ‘lenses’: expectation, actual and revised. All these lenses give a view to trade entry and exit, as shown in the diagram below. 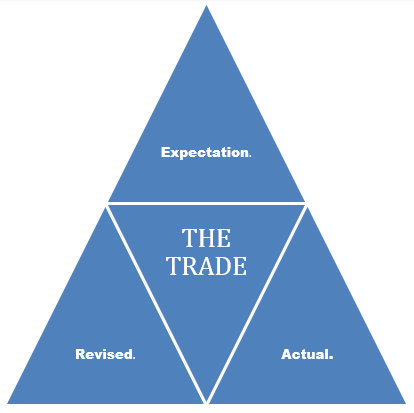 So what do these lens names mean?

If the market (meaning the sum total of all participants within the forex market as a whole) expects an improvement in unemployment data, then this expectation will be priced into the value of a particular currency against another. For example, an expectation of improved US unemployment data may lend strength to USD versus another currency.

However, if the actual data shows that the number of people unemployed in the US has increased, then this will cause a market correction as participants revalue the Dollar by selling on a suspicion of weakness in the US economy.

This sale will increase the supply, but lower the demand, for USD, causing devaluation relative to other currencies. Later in time, the US government department responsible may issue a revision to their data on unemployment. This revision may indicate that the previous number of unemployed should be lessened. Thus the market thinks to itself: ‘not as bad as we thought, then’ and the USD will regain some strength.

An important thing to note in the above is that market participants drive all of the reactions to fundamental data, and that they are individuals who form opinions based on available data.

For individual traders within the market, it is the market reaction to data that dominates a currency’s value, not the data itself. For example, a good set of data may not strengthen a currency if that result has been priced into the market already.

Fundamental data, if correctly used, goes hand in hand with technical analysis of the markets to provide profitable trades. Fundamentals driven trading, often referred to as ‘trading the news,’ can provide for trades involving large swings in the value of a currency.

This is especially applicable to market shocks, when expected and actual economic data differ widely. Some of the most profitable opportunities arise in this situation, and a good understanding of the fundamental causes will reap rewards.

There are many fundamental or economic reports that have a major impact on the forex markets. Market participants should analyse the emerging fundamental data in order to identify profitable trading opportunities, as well as the dangers posed to their accounts.